“Nothing wrong with your arse..." Jaye Peaches is here with Sophia and the Duke 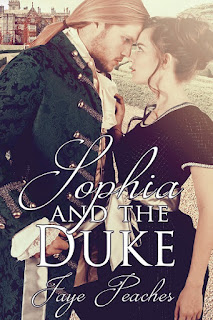 Hi Aubrey, thank you for inviting me to your blog.
I’ve brought along an excerpt from my latest book, Sophia and the Duke, which is a Regency spanking romance.  The fun part of writing about this time is wives had to do as they were told, due to their status and if not, they’re in trouble! When an aristocratic young widow marries a rough around the edges colonial fur trapper, who has inherited a dukedom, she has to go against her natural pride and show him respect. Sophia, due to her unfortunate attitude towards her new husband, has been spanked and sent to their bedroom. However, Nathanial is keen to move on and help her recover from her uncomfortable situation.

The mattress next to her sank as he laid next to her. She tensed, seeing him scoop out a dollop onto his finger and she squeezed her eyes tightly shut. She yelped when the cold unction touched her heated skin.
“Keep still,” he warned, making circles with his finger. “This needs cooling down first.” He applied another layer of cream to her other cheek. “Then this one.”
Sophia squirmed, bucking her bottom up and down as he made larger circles, smearing the cold cream to cover her whole buttock. When he slipped his fingers down the furrow between her cheeks, she moaned and he chuckled.
“Spread your arse cheeks. Go on!”
She reached around and separated her buttocks, and at the same time, buried her face in the pillow.
“Tut,” he admonished. “Nothing wrong with your arse. Quite lovely. I might fuck it one day.”
“Nathanial!” she shrieked and he cuffed her bottom in reply.

After the passing of her husband, the elderly Duke of Brockenhurst, twenty-two-year-old Sophia chafes at her family’s expectations during her lengthy mourning period. When she is free to re-emerge in society at last, at her grandmother’s insistence she entertains the courtship of Nathaniel Hartwell, a distant cousin of the old duke and the man next in line for the title.

To her shock, Sophia learns that Nathaniel has spent the last eight years living as a trapper and fur trader in the mountains of Canada, isolating himself from the world after the tragic death of the woman he loved. Though he is a rough, uncivilised man, his devilishly handsome looks and commanding presence excite her in a way nothing ever has before.

Sophia sets out to transform the new duke into someone suitable for polite society, but when her comments become disrespectful and mocking Nathaniel takes issue with her behaviour. Almost before she knows it, she is over his lap and her aristocratic bottom has been bared for a sound spanking.

Knowing that it is the right choice for all concerned, Nathaniel asks her to be his wife, but despite the fact that their marriage begins as one of convenience he is determined to show Sophia the intense pleasure a strong man’s dominant lovemaking can bring her. Though her spoiled attitude occasionally earns her a bright red, well-spanked bottom, as the weeks pass her desire for him grows ever stronger. But can love truly bridge the gulf between people from such different worlds?

When not writing, Jaye is busy spending time with her family, enjoying music, sometimes composing or drawing and if the weather allows, gardening.