Low T Is Not For Me 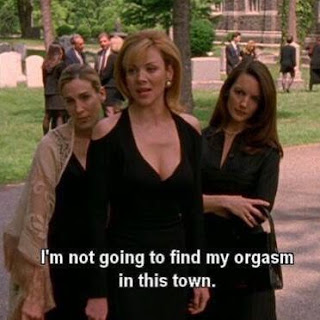 For years and years, we as a society have been inundated with info and commercials on erectile dysfunction. We know it's common, it's likely to happen to men of a certain age, or with certain health issues, it's natural, and there are a million pills, shots, and creams to help those gentlemen rise to the occasion.

What do we know about female "erectile" dysfunction? Not much. It's kind of implied that it's natural for a woman to NOT be into sex. And if a woman who normally enjoys intercourse stops enjoying it, and is no longer interested in sex, the first assumption isn't that there is a physical, health related issue. Oh, no. Most of us, doctors included, ask about what's on our minds. What's going on with our relationship? Where is the stress coming from?

We as a society imply that it's no big deal and natural for a woman to have sexual dysfunction, and we offer no solutions outside of rest, relaxation, vibrators, and letting nature take it's course.

I'm hear to tell you, that's bullshit. Clinical ED and sexual dysfunction does happen to women. It's more than a mental problem. And it is a big deal.

In a little over two months I'll be 35. By far this is not old, but I am discovering that this is not a young age either. One could argue that our thirties really are the beginning of being middle aged. I'm discovering my thirties is a period of declining from my once jubilant youth. I no longer "bounce back" from simple injuries, and there are serious consequences to things like pulling an all-nighter or drinking things once drunk in my twenties.

I may not wake up with my back thrown out, which I hear can happen for no reason in your forties, but I did throw out my coccyx playing soccer with my son. My coccyx. I broke it as a child, and apparently that means one simple misstep in my thirties can throw me into a world of hurt.

With these realizations of the aging process upon me I was still surprised when I began having sexual dysfunctions. Over a year ago I started having difficulty orgasming. I could still become aroused, but the build up would fizzle and it would take genuine ingenuity and effort to get me to a happy land I once so easily trekked to on a daily basis.

I mentioned this new coital challenge to my gynecologist. She at first looked at me with the confused chagrin of someone about to impart a fact of life they believed to be well known. A knowledge so common, my gyno was obviously taken aback that she must be the one to inform me. Using small, kind words, she explained that this can be a normal stage of aging, and is a common predicament for many woman of all ages.

Okay, I knew that. I haven't been living under a rock.

But...quite honestly I never thought it would happen to me. I've had health issues in the past that sucked, but were easy to wrap my head around. I was born with only one and a half kidneys and only one functions to its full potential. It caused me all kind of grief. I've had Chronic EBV poking me at inopportune moments since I was thirty. I didn't see that issue coming, but for some reason as devastated by it as I was, I wasn't in complete disbelief that it was happening to me.

When a strange, creeping depression started blanketing me, I never thought it was related to my libido issues. I've had clinical depression before and it never effected my sexual functions. Not to mention, while feeling bummed out all the time, it wasn't the depression I had before, so in my mind it wasn't depression.

There are many things in my life I've taken for granted, my personality and self absurdness amongst them. At the top of the list is my high libido, and easy to operate vagina. I always naively assumed these things that made me me, these inherent pieces of my personality, would never go away.

When insecurity and low self esteem ate at me in a way I've never experienced before, I thought it was because of the stress and blues that kept taking hold of me.

For many of us 2016 was rough year for varying reasons. In Chinese Astrology it was said to be the year of the fire monkey. I can believe it, if only because this year felt like we were all being pelted by poo thrown by an obnoxious, trouble causing monkey.

I'll spare you the list of hits my family and I took, but needless to say when I stopped being able to be aroused or orgasm at all I, when it was a struggle to feel anything other than mediocre, and was fighting depression daily, I told myself it was stress. We had a lot going on.

I knew something was wrong, but I refused to admit it out loud. Not even to my husband. As my sexual dysfunction grew, I pushed him away a little at a time. We've always had an intimacy and comradery that was very fun loving, close, and ...sexual.

He wanted sex from his wife who normally loves sex, but my body wasn't having the normal feel good tingles his touch usually invites...and that made me feel inadequate. We had dry spells in the past, but they were always short lived and we quickly got back to being the couple who despite everything, would sneak off for naughty romps.

All of a sudden, I wasn't that person any more and every time he touched me I began being gripped by anxiety because I couldn't get aroused, I definitely couldn't orgasm, and because of that, sex, even with artificial lubricant was starting to hurt.

For the first time ever I was trying to fake it, and I wasn't good at it. I felt awful, he felt that something was wrong, and neither of us were talking about it.

My complete withdraw was causing insecurities in husband and our relationship. I could see this but I was powerless as to how to fix it.

When I finally told him what was going on he was so relieved and had so much compassion for the pain I was going through. He'd actually feared I was having an affair. He thought I didn't love him anymore.

It was crushing to realize how deeply I hurt him by not telling him what was going on sooner, but every time I tried the words stuck in my throat and I'm not sure why. I've always told him everything, but this felt like shards of glass tearing at my skin everything time I even thought about it. And while it was a relief to tell him, it was only a band-aid. A huge part of our relationship was still missing. There was still the weight of my sexual dysfunction hanging over our heads.

A few weeks ago I had a visit with my gynecologist and wild-eyed with desperation I told her what was going on. How it was effecting my relationship, and yes, it may be normal, but it's not normal for me.

She told me as we age our bodies start processing everyday stress differently. I had a moment of terror in which I believed she was going to give me the same song and dance as before, but then she continued with saying that she was sending me in for bloodwork to check my testosterone levels.

Yes, it turns out even the ladies need testosterone. And yes my levels were low. My gyno--who I've always loved, but now may make a shrine to--prescribed me a testosterone cream. It is a fraction of what men with low T use, but I was still nervous to apply.

I'm not big on Rx use. Even more so I had silly visions of back hair and penis growth like I was about to rub on illegal steroids or something.

The cream is only applied three days a week, but that first week I had stirrings of the female happy land variety. And outside of that, the missing pieces of my personality were waking up, and the strange depression that didn't feel like any depression I had experienced before lifted.

It wasn't until then that I realized my sexual function wasn't the only thing hit by my lack of testosterone. All these other things that had torn at me and weighed my down over the year may have been the cause of my low T, but also exacerbated by my low T.

Some women may naturally have a lower testosterone level, but after getting mine back up I'm thinking low T is not for me.

As for my sexual functioning...it's a work in progress, but everyday is a little sunnier.

My first week of testosterone cream application, I was honored to be able to beta read Tracy St. John's new book, Clan and Command--coming out Dec 16th! Besides being an amazingly captivating story that furthers the Basma/Kalquor conflict, the book is hot as fuck. And TMI, but when I got wet panties while reading, I shed some happy tears. Okay, I balled like a baby. It was the first time in a long time and offered me a new hope.

I will never watch the episode from Sex and the City where Samantha can't orgasm the same way again.

Anxiety when it comes to sex is still present. My first orgasm with my husband was a nerve wracked affair which I had trouble shutting down my brain. But, it's getting better everyday. Just last night I had the kind of orgasms I feared I would never experience again.

There are so many times in our lives when we know in our hearts there is something's not right with our bodies, or our health, and we don't speak up. Sometimes we fear the answer, and sometimes we just don't want to face what's going on.