Slater Everything I believed was a lie. Everything except for her, the one person I blamed for it all. MacKayla Simone was beautiful. She was sexy as hell. She was also the setup. One night. Sex that rocked my world. Rocked it to its very foundations because the next thing I knew, she and I made the headlines of every paper, every news channel across the country, and it cost me everything. But that wasn’t the worst of it. That came when I learned who was behind the setup. That was when I understood what it meant to be destroyed absolutely. I don’t know why I went after MacKayla. She’d been a pawn just like me. But it was all I could do, all I had left. Hell, it was the one thing keeping me from tumbling into the abyss and never coming back into the light. Find her. Find the girl who’d f*cked me. Find her, and make her pay. MacKayla I didn’t know who Slater Vaughn was, but if I had, it wouldn’t have mattered. Not when my sister was in trouble. I would have done what I did anyway. You can judge me. You can call me a whore. But I would have done it anyway. One night, they’d said. Make him want you, let him have you. Easiest money in the world for just one night of my life. Only it wasn’t one night because that night obliterated Slater Vaughn, and he came after me. He told me I owed him, and truthfully, I did. Hell, maybe those years in hiding, I’d been waiting for him to find me. To punish me. To make me pay. Maybe I sought his forgiveness all along. But now that he had me, how far would he take this game? Slater Vaughn was a broken man. He had nothing left to lose. What was to keep him from taking me with him into his darkness?

USA Today Bestselling author Natasha Knight writes dark romance as well as spanking romance in a variety of genres including contemporary, paranormal, post-apocalyptic, science-fiction and fantasy. She is a #1 Amazon Bestseller in multiple categories forever searching in every story for that single most important element of love. All of her stories contain at least one kinky Alpha male, lots of dirty talk and a well deserved happily ever after.

Posted by Aubrey Cara at 9:00 PM No comments:

I Just Need A Moment

I'm having a teen level angst-fest. You may be wondering what has my tea kettle a boiling. Is it the sh** for brains cover model who is making poor life choices, and alienating his clientele? Is Amazon getting me down by being...well...Amazony? Are people pirating my books? (<--I sincerely hope not for the last, I don't actually know, but if you see anything...)

The latest series I've been devouring isn't one you may guess. I've been reading The 5th Wave YA series, by Rick Yancey, and as you may know, the first book has been bastardized for a movie now.

Can you feel the rant boiling?

Yes, the book was better than the movie. The book is ALWAYS better than the movie, but that is not what stuck in my craw. Although, I did find myself getting more and more annoyed by every new altered scene that was more butchered than the last. Not even Alex Roe's applaudable good looks could save the stink fest they made the plot into.

No, the detail that tipped my scales, the one thing that had me muttering obscenities under my breath, was the girl they cast for the character Ringer.

The movie has Cassie, an all American, awkward, strawberry blonde teen girl as the main protagonist. In the book there are four main characters and their stories are actually divided more evenly than portrayed. In the second book Ringer, who is a bad ass Asian, Native American girl, is the main protagonist.

Yeah. If you haven't read the books, but watched the movie, you may have noticed that Ringer is a goth girl. Not Asian. 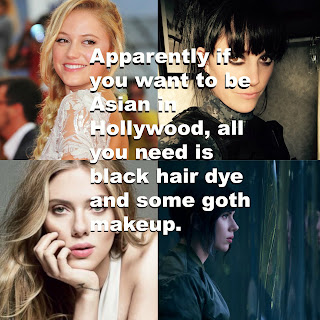 Here's what annoyed me about this: They changed so many details about the plot, why bother trying to Asian this girl up? I'm not even upset as an AmerAsian woman--which I am. I don't mind when Hollywood envisions something completely different. They changed eight-year-old pudgy character, Poundcake into a fit teenager. That's great. Live your dreams Hollywood. But if you want the actress to look more Asian, why not just hire an Asian actress?!!!

And I know Asia is a big place. Ringer is described as being 3/4 Asian and 1/4 Native American with shiny, raven black hair and porcelain skin. Maybe she's not Chinese. Or Indian. Maybe she's Russian, and all us readers are assholes for thinking she's the kind of Asian that we all associate with Asia. But I think we all know in our hearts she's not Russian.

Also, goth makeup? Really? Because six months or so after the Alien-Apocalypse a girl who is described as naturally strikingly beautiful, without any makeup, would be concerned about putting on her eyeliner every morning?

Hollywood producers can suck a bag of dicks.

So that's it. As rants go, it's not long winded or overly inflammatory. I'm just really sick of the strong, Asian female roles being tricked out to blonde American girls the director and producers plan on making look more Asian. That's just a load of crap.