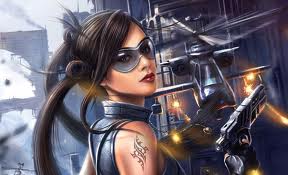 This past year I read David Bischoff's space opera Starhounds. This is a fun humorous space romp with a kick ass heroine, super sexy pilot Laura Shemzak who rescues her hot genius brother Cal with the aid of steamy space pirate Captain Tars Northern. Although Tars would gladly sample a piece of Laura, she and her brother Cal have a deep and abiding love for each other. Its' said sibling love that is a humorous on-dit through out the series.

What left me wanting was one, Laura plugs into the ship, literally plugs in, with a ton of wires that plug in to her arms and legs. I know this series was written awhile ago (1987) but I still wished for Laura the kind of wireless technology I enjoy every day. Also, this is a straight up fiction series. Why aren't all these sexy people having sex?! I know my mind tends to lean towards the gutter but they got busy more on Battlestar Galactica than this series!

This book is a great read for the sci-fi reading masses but honestly the entire time I was reading this series my mind was bubbling over with sexual possibilities! If only there was a well written sci-fi book somewhere in a galaxy not so far away, with the same kind of sexy characters having the hot space sex I so wished for Laura, Tars and Cal. Oh, but wait, there is such a book?! 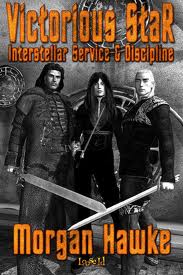 In Victorious Star I found everything I wished for in Starhounds and so, SO much more. Victoria Stark is the kick ass nav-pilot and bless her, she's wireless, only having to plug in occasionally with a thumb drive. Even better she has gotten herself nabbed by super yummy Captain Ravnos and his delicious First Officer Seht.

What made this book really stand out to me were all the different elements Morgan Hawke brings to play. She has aliens with different looks and cultures which is a must for me. The back drop and dialogue is everything you'd expect from a deep space sci-fi but the dress through out most of the book edges much closer to steampunk. Let me repeat that. The clothes everyone wear the first half of this book are distinctly steampunk!

We have males and females in tight cloth trousers and buckled knee boots, sporting velvet waist coats and lace lined neck cloths. I think it's awesome but it completely threw me off at first. I've never seen this done before. Later in the book, amongst the skeldhi people, you see skin tight leather form suits, black kilts, fancy sweeping robes and full length fur lined capes that put me in mind of the more recent Star Wars with a little Game of Thrones.

If that weren't enough Hawke throws in swords that are used with slightly less ferocity of a Quentin Taratino movie. In fact if Quentin Taratino, Gene Roddenberry(creator of StarTrek) and Kate Pearce(erotic author) teamed up I have no doubt their brain child would be Morgan Hawke's Victorious Star.

Around each corner of Victorious Star is another surprise and another plot twist that usually includes another boundary being stepped over. This book is packed with hot gasp worthy, limit pushing scenes that introduces possibilities and some positions you should have immense upper body strength to contemplate.

If you end up enjoying Victorious Star your panties will be soaked for the next book in the series Fallen Star. This 361 pg book is just as hard edged as the first, packed with dark love, action, domination and of course skeldhi.

Fallen Star is built on the same raw sexuality of the first book but has a much different feel than Victorious Star in that it has a vampire-ish vibe. As someone who doesn't read vampire books I can safely say the vampire-ish tone is creative and not overly done. Plus it's in space and they have hot alien cocks. I'm a sucker for alien cock.

The last book in the series, also full length at 257 pgs, is Lost Star the prequel to Victorious Star that tells the back story of Ravnos and Seht and is full of all the same heart stopping hot scenes and adventures of the first two. Although a prequel you may want to read Victorious Star first. This one was written a few years later. 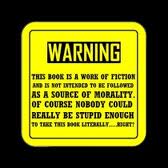 Ok, so rape in the memory sequence isn't exactly titillating, but I appreciate the heads up! Some books are straight up vanilla erotica and have added the playful warning in favor of the boring, contains graphic sexual explicit scenes. I honestly find these just as delightful.

Warning: This book depicts HOT sexy naked cowboys and girls getting corralled, down and dirty and may cause heat flashes!

The warning let's you the reader know what to expect from your book. If you aren't into female on female action and f/f is in the content warning you know the book may not be for you. On the flip side if you are really into menage romance and you see m/f/m, you're going to get excited about the book!

I just read a book that after the warning there was a disclaimer.


Please do not try any new sexual practice, especially those that might be found in our BDSM/fetish titles without the guidance of an experienced practitioner. Neither Loose Id LLC nor its authors will be responsible for any loss, harm, injury or death resulting from use of the information contained in any of it's titles.


Oh holy mother of wet panties! Thank you Loose Id LLC! I could hardly contain my excitement! A warning and a disclaimer? Jackpot!!You as the reader are now intrigued and know that this book is going to push boundaries and will not be pc!

So my fellow readers, respect the warning labels and know that your comfort levels may be pushed and you may not find some material as arousing as others. What always makes me scratch my head is when a reader knows what their personal comfort level is, they read the warning, they know the book they are about to order is NOT in their comfort zone and they read it anyways.

They see all the great reviews (from ppl who have much different taste) and they try that proverbial dish on the menu they never wanted to try and then they are surprised when they don't like it. That would be fine but not only are they surprised ,they give it one star and a horrible review.

With that being said, kudos to those readers that stepped outside of their comfort level and tried something new. Everyone is entitled to there own opinion!! That's why they have reviews. Quite honestly those types of reviews help others also thinking about trying that dish on the menu they know they wont like.