There are perks to being an indie author. You get to set your own hours, choose your co-workers, and for the sake of complete honesty, you don't have to wear pants. I'm in my jammies right now. They're pink with elephants on them. And, it's well past noon.

No effs given here.

One of the downsides to this hermit lifestyle is the time spent alone often leads to squirrel brain. At least for me. Today is one of those days. I can't seem to collect my thoughts. I'm easily distracted. I can't get into a flow of writing, and I want to read everything and nothing. This means I've been rooting around my kindle library for a re-read and I realized, I read a LOT of  sports romance. A. LOT.

Not only that, but I've re-read my favorites multiple times, so I thought I would share those. The books that keep pulling me in, over and over again.

Come, procrastinate with me...

First off; FOOTBALL. The American kind.

The Wall of Winnipeg and Me, by Mariana Zapata. Full disclosure; this book is WAY more slow burn than I usually tolerate from contemporary romance. Not only that, it's done strictly from the female POV.

Okay, so I'm not exactly selling it, but the thing is, this book is soooo good. I actually began listening to the audible first while I was renovating my house. It's a sixteen hour read, but I was working twelve hour days and quite a bit of it was by myself. I listened to this book every chance I got, and when I wasn't listening to the audible I was reading the e-book version. I've since re-read and re-listened to this book multiple times.

Marina Zapata has a way of writing romance that borders on general fiction. You'll fall in love with both characters and be hoping and praying they get together as you flip pages. You'll be invested in how their lives play out. A part of that is because the friendship of the characters builds without chemistry well before it morphs into something romantic.

It's a fantastic read. Excellently crafted, and I will devour it again soon. 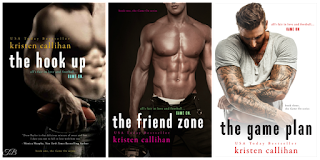 The Game On series by Kristen Callihan. All the books are fantastic for different reasons. The books begin in college and move to their adult life, but the vibe of the series is a bit more mature. Book one, The Hook Up is fun, but has lots of heart. Book two, The Friend Zone is laugh out loud hilarious, and super charming.

Book three, The Game Plan is like tasting chocolate for the first time. You just want to savor it and then have another piece.

I think I've re-read Book three, The Game Plan the most times.

Click here to check out the Game On series----> AMAZON 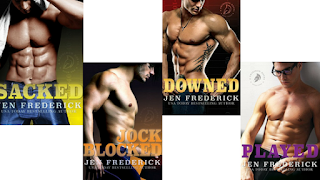 Gridiron series, by Jen Fredrick. I'm a fan of Jen Fredrick. Her Hitman series is one of my all-time favorites, so when I found out she'd written a football series, I was all over them. The characters are college aged, and they read college aged. That's not for everyone.

It was for me. Big time.

All the books in the series are entertaining and often times sweet, but the ones that pulled me in for re-reads were Jock Blocked and Downed. Both have a constant stream of off beat humor and heart that made me fall head over heels in love with the characters.

Click here to check out the Gridiron series -----> AMAZON 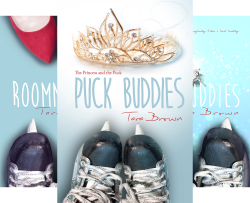 Puck Buddies series, by Tara Brown. This is a graphic of the old covers. I liked them more, but I understand the need to rebrand. Anyways, these books are awesome and amazing, BUT I think they're done a disservice if read in order; Puck Buddies, Roommates, Bed Buddies.

Roommates was published first, and it's the funniest book in the series. The main couple is hilarious.  Puck Buddies, is the best friend's book. It's a prequel to Roommates and it has a much different vibe. Part of what pulled me in and made me so tied to the secondary characters of Puck Buddies is how we get to know them in Roommates. Not only that, but Bed Buddies is the continuation of Puck Buddies, and while Roommates timeline happens in the middle, it should be read first. IMO.

Either way, I love this series.

Click here to check out the Puck Buddies series-----> AMAZON

Off-Campus series, by Elle Kennedy... Trust circle confession; this is the series I read when I've slipped into a funk I can't shake. I watch Me Before You, ball my eyes out, then keep Friends and Gilmore Girls reruns on in the background while reading this series. I may throw a cry book in there, like Ryan's Bed or The Reluctant Dom just to mix things up, but this series ALWAYS gets re-read.

And it's not sad!

It's funny, entertaining, and sometimes emotional. There's some slow to medium burn, lots of fantastic secondary characters, and lots of H/h character building interaction. You'll laugh, be charmed, possibly be outraged, melt, maybe cry, and fall in love. And somewhere in the background, somebody is playing hockey.

Book three, The Score is my favorite of the bunch. It has the most humor, but it also made me ball my eyes out. 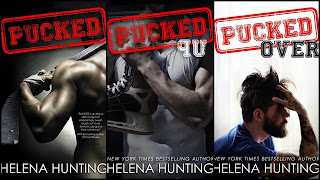 Pucked series, by Helena Hunting. If you haven't read book one, Pucked, go ahead, stop reading this post and go get your copy of this book. Or at least download the sample. If you are anything like over half the romance readers in the world, you'll find this book hilarious. Like, spit out your coffee, laugh embarrassingly loud, hilarious.

I'm going to go out on a limb and say Violet from Pucked is the Stephanie Plum of sports romance. She quirky, a little insane, has funny friends and family, and is super entertaining to read. The whole series isn't about her, but her and her family show up in all the books.

There are eight books in the series. I have four of them in e-book and on Audible. I've enjoyed them all, but my re-reads are Pucked, Pucked Up, and (not shown in the graphic) Pucked Off. Side note; the audibles are excellently done and have some of my favorite narrators.

Click here to check out the Pucked series-----> AMAZON

Yes, you read that correctly. Wrestling. The unitard, starvation, and helmet kind, not the WWE kind. And yes, an author decided to make it sexy, cause, why not.

How To Date A Douchebag series, by Sara Ney. I believe I found this series on an instagram book blog and was intrigued by the title and the fact that they were wrestlers. Then I read them and fell in love. This is a great series. The humor is almost National Lampoon, but not nearly as raunchy. The guys in book one & two, The Studying & Learning Hours, are 110% douchebags, but that just added to the overall humor of the books. They were strangely lovable despite, or maybe because they were such over the top dicks.

I also have at least two of of these books on audible. The narration is fantastic.

Sara Ney also has some fun baseball cross over books, I believe set in the same world/college as the How To Date A Douchebag.

Posted by Aubrey Cara at 3:35 PM No comments:

Prepare To Get Dirty

Do you like rough and tumble, hot and dirty, dominant heroes?

We're serving them up in spades!

This has been one of my all-time favorite projects to work on. And beginning Aug 16th-Sept Hard n' Dirty books by myself, Alta Hensley, Tara Crescent, Renee Rose, Alexis Alvarez, Ava Sinclair, Jane Henry, and Lee Savino, will release.

My book, Getting Dirty, is a full-length menage romance, coming out Aug 16th! 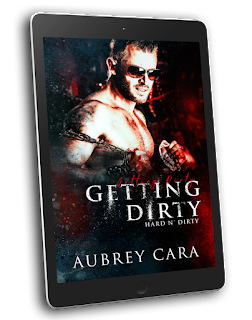 𝐏𝐞𝐫𝐟𝐞𝐜𝐭𝐢𝐨𝐧 𝐢𝐬𝐧’𝐭 𝐚𝐥𝐰𝐚𝐲𝐬 𝐬𝐨 𝐩𝐞𝐫𝐟𝐞𝐜𝐭.
All I’ve done since I was seventeen years old is try to prove my father wrong.
Try to prove I am better than him and his perfect lineage. His perfect name.
Anyone who has gotten in my way of attaining that goal I consider collateral damage.
Now my life has spiraled so far out of my control, I’m free falling, and for whatever reason Jess and Jace feel like a safe haven.
They’re not. They're two blips from my past. And that’s where I should have left them.
We come from different worlds
Whatever we have can only exist in this moment.
They’re just two dirty mechanics.
And I’ve spent my whole life avoiding getting dirty. 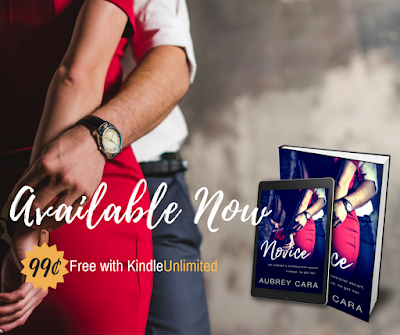 “You’re gorgeous like this,” he purrs. His spanking hand trails over my thighs and ass, up my spine and back down. “And you were such a good girl.”
His words only add to the liquid heat gathering at my epicenter. The throbbing in my ass is becoming a warm ache spreading down to the pulse point of my clit.
Long fingers nudge between my thighs and slide through the copious moisture there. I hide my face even as my legs wantonly fall open a little to allow him better access.
“So wet, my little novice. I think someone liked their first spanking.” He says first like it will be one of many.


I meant to teach her a lesson. Scare her off.
But her tears and wounded expression nearly did me in. They made me want to eradicate all her hurts.
Never in my life have I been so affected by a woman, but here I am. Done in by a novice call girl. A fucking butterfly scientist.

The Novice is a 20k standalone novella and also features an exclusive first chapter preview to my new full-length menage romance Getting Dirty, releasing Aug 16th.

For more on Getting Dirty and the Hard n' Dirty series, click here 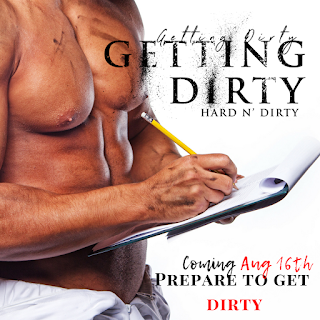 Posted by Aubrey Cara at 2:33 PM No comments: