Daggers at the ready, the three pirates once again approached the doors. Vayne spied a young, fair-haired male standing wide-eyed, his mouth dropping open as Barek, Duff and their Captain charged from the lift. Vayne followed on their heels, wincing as they mowed the young man down with a hit to the head. Then all chaos descended.


A significantly smaller figure, dressed completely in black, waded into the triangle of pirates. It laid Barek low with well-placed blows to his knees and an uppercut to his jaw as he fell to the ground. The baton inflicting the punishment flashed in a blur of movement to match the warrior’s whirling grace. Vayne was already moving to assist when the fighting dervish dealt with Duff, body moving with grace and deadly intent, bringing the pirate down with punishment to his kidneys. Short black hair gleamed in the harsh lighting as the warrior spun to take on Captain Ristos. 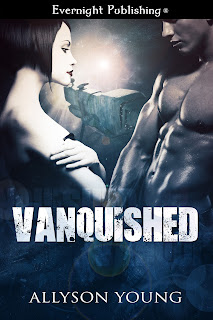 Vayne used his shocker, nearly catching one slender, black clad shoulder as their opponent made contact with Ristos’ ribcage, the baton making a dull, wet sound. But the little warrior whirled out of range, turning to renew the attack, and the bolt spent itself harmlessly against the bulkhead. Vayne’s cock filled and stood at full attention, causing him considerable discomfort in his tight-fitting space uniform. By the shades of Turco, it was a female. He locked eyes with orbs a brilliant shade of the golden gemstones so prized on his planet before she charged, moving gracefully on the balls of her bare feet.


“He dies!” Duff’s howl cut through the tension as Vayne prepared to defend himself, and the female halted, stumbling as she did so. Duff held his weapon at the young male’s throat, vicious intent written across his features.


“No, don’t,” the lithe beauty called out, and Vayne watched, transfixed, as she dropped to her knees, carefully laying down the lethal weapon she used so efficiently. She then clasped her hands behind her neck.


Nothing in her posture spoke of true submission, but it didn’t matter to Vayne’s cock. That appendage throbbed painfully and he was at a loss as to how to calm it. Never had he ever… Vayne struggled to make his body move. Ristos moved first.


Kicking aside the baton, he gestured to Duff, who released his hold on the still-unconscious young male. Was this woman attached to the man? Vayne shook his head. It didn’t matter. She was now his.


Ristos bent and clipped a pair of solar cuffs around the woman’s wrists, and Vayne approved of how efficient the captain was, yet afforded the little female respect. He wasn’t the only male to appreciate her attempt to defend this deck. The restraints emitted slight whirring sounds as they engaged. Charged by any light source, they were virtually impervious to tampering and would open only to the owner’s print. Vayne pulled the control from the captain’s hand, entered his own print to replace that of Ristos’, then crushed the control beneath his boot.


As desperate as the Shadalla were, their scientists had confirmed the compatibility of Earth females to breed and bear their children, and some of his species’ males had actually found their chosen. Gone was Vayne’s need to merely pick a female out of the women on this ship, using careful parameters to ensure she was suited for his position, able to bear his children, and of a nature and appearance to stimulate his desires in order to put those offspring in her belly. Royal concubines weren’t unheard of, after all, and the odds of him finding a chosen were slight. But he couldn’t look any further, impossibly drawn to this imperious warrior at his feet. And should he ever be fortunate enough to find an actual chosen mate, this lovely woman would retain concubine status, regardless.


“Bring the men out. Offer. I’ll send my exec to scrutinize the females.” He wasn’t that overwhelmed to forget he had a duty to other men in his service.


He reached down and fit a hand under the elbow of the female, and his world turned upside down. The physical attraction had been immediate, granted. But the instant he touched her and her scent enveloped him, his brain exploded with a revelation he’d only experienced once in his life—and a very subdued and pale version at that. One manipulated by science. Vayne didn’t need another minute with her to understand the symptoms and wished to shout his joy out loud. She was a chosen and not his future concubine. She came up with the lightness of gossamer, and only his quick reflexes saved him from a knee to the groin as he turned to catch the blow on his thigh. Little spitfire.

In the future, Earth negotiated a treaty with the Shadalla, only to wage another war with the Juxtant. Together, humans and Shadalla defeat that mortal enemy, but corruption and greed always prevails.

Vayne Palldyn, Sovereign of the planet Nibiru, is determined that his species not become extinct, and will take revenge on those who unleashed that genetic bio weapon. His kind has kidnapped human women before, and despite the Treaty none returned to Earth—the Shadalla have a biological advantage in seducing Chosen mates.

Honorably discharged warrior Neira Grekhov boards the starship Astris, seeking peace but succumbing to soul sickness. Until the Astris is boarded by pirates.

Spying Neira ferociously defending her fellow passengers, Vayne pursues her, as his Chosen. Neira resists, and despite healing her emotionally the Sovereign wonders if he must concede defeat at the hands of this infuriating woman.

Then the stars align and truths are discovered…

Allyson will write until whatever she has inside her is satisfied- when all the heroes man up and all the heroines get what they deserve. Love isn’t always sweet, and Allyson favours the darker side of romance.

allysonyoung45@gmail.com
Posted by Aubrey Cara at 5:10 PM No comments:

Never Lie to a Highlander- Shared by the Highlanders 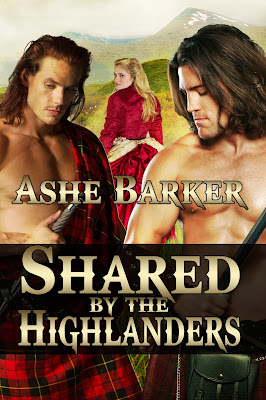 I love the humor and characters in Ashe Barker's historical spanking romances and I'm excited to have her visiting today! She's sharing a wicked excerpt from her new spanking romance, Shared by the Highlanders. It had me giggling as well as getting hot.

"You'll do as you're told, lass. Which brings us to the next matter we need to address."  Robbie glances around, his gaze coming to rest on a small stone building about hundred yards from us. Beside it stands a sturdy oak tree, already tall enough to be spreading its branches over the solid looking roof. He turns to Will. "That should do fine, do you think? That bough sticking out to the side?"

Will nods. "Good choice. Best sling a blanket over it though. We don't want her getting all scratched, after all. Striping her arse is punishment enough I reckon."

"What? What are you talking about?" I so do not like the sound of this. Any discussion of my arse and punishment surely heralds disaster.

As Will peers into his saddlebag, presumably in search of the blanket he mentioned, Robbie continues the explanation."Well, lass, there's the matter of honesty. And truth, you understand. We set high store by it, and we will have it from you. Always. And from your argumentative tone I daresay your obedience is soon to become an issue too. It's time for you to learn what the consequences will be when you lie to us, or if you fail to obey an instruction. With luck, and if you prove to be a fast learner, it may not be necessary to administer another punishment spanking for some time. But right now, we have no real alternative."

"Spanking! No way. You are not spanking me."

Robbie grins, his expression unrepentant. And determined. "We are, lass. Right here and now. See yonder oak beside the stock shelter there? You'll be bent over the branch that stretches out to the side, your wrists and ankles tied together to make sure you don't shift from where we place you. You'll be naked of course, your arse tilted up for easy reach. Then you'll take six strokes of the switch. From each of us."

"Aye, you could call it that I daresay, since you'll not be acquiescent by the sound of things. Don't look so stricken lass, it'll soon be done with and we can all be on our way."

"You promised I wouldn't be hurt. Last night, you said that."

"I think what we actually promised was that we would do you no harm. And we won't. A little firm discipline though, now that's another matter entirely. I've yet to meet the woman whose disposition was not the better for a well administered paddling. And most are truly thankful for it too, in the fullness of time of course."

After she becomes lost in a thick mist while hiking near the borders of Scotland, Charlene Kelly is shocked to encounter two men on horseback. To her horror, the pair—both of whom are dressed in Scottish tartans—accost her and won’t let her go. Though the men speak with accents so strong they seem to come from another era, Charlene is able to gather that they believe she is a thieving boy.

Unsure what else to do, Charlene plays along.

When Will Sinclair and Robbie MacBride discover that their captive is in fact a woman—and quite a beautiful one at that—there is only one thing to be done. She must be punished for her deception, and punished thoroughly. A switch applied to her bare bottom does the job well, and soon enough the two men are comforting Charlene as she nurses her bright red, sore backside.

Upon learning that the highlanders are hand-carrying an important message from Elizabeth of England to the court of Mary, Queen of Scots, it finally dawns on Charlene that she is no longer in her own time. Though she is desperate to find a way home, Will and Robbie are both unlike any man she has ever met, and their unabashed dominance awakens in her a powerful need to submit. Soon enough, she finds herself blushing with shame and quivering with desire as she is taken long and hard by two rugged highlanders at once. But can these hardened warriors keep her safe from the perils of a world far more dangerous than the one she left behind?

I tend to draw on my own experience to lend colour, detail and realism to my plots and characters. An incident here, a chance remark there, a bizarre event or quirky character, any of these can spark a story idea.

When not writing – which is not very often these days - my time is divided between my role as resident taxi driver for my teenage daughter, and caring for a menagerie of dogs, rabbits, tortoises.  And a very grumpy cockatiel.

I have a pile of story ideas still to work through, and keep thinking of new ones at the most unlikely moments, so you can expect to see a lot more from me.