Candi's taken on her brother's debts. She's in hot water with dangerous men, who want a whole lot more than money from her. Having no one else to turn to she asks her boss's son for a loan, and ends up getting much more than she bargained for. 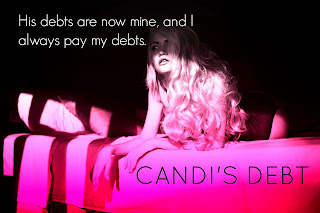 After Wyatt leaves, I can feel Hank’s eyes burning into the side of my head. If the look on his face the entire time his gorgeous friend was here is any indication, I do not want to hear what he has to say. And I have a feeling he is just dying to tell me something I do not want to hear. So I just ignore him and go back to work like he isn’t here.

“Do you really think right now is the best time to be dating?”

Well, that didn’t take long. I glance at the clock on the bottom of the screen. Mr. Buffoon waited two whole minutes.

“I’m twenty-one, single, and ready to mingle. Some would say this is the best time. And I’m not dating your friend, although he seems nice…plus he has dimples.” I’ve always been a sucker for a guy with dimples. Indeed he is cute, charming, and way more personable than sunny old Hank.
“Seriously?”
“Seriously.”
“Wyatt is not nice. He’s a walking erection you looked more than happy to hop on.” I gasp in outrage, but the ass ignores me and keeps going. “And what is that shiiistuff about you downplaying how smart you are?”

“Maybe I like being a bit of a mystery, and FYI I do not want to hop on his anything. What the hell is your deal? If you have such a problem with me why are you even coming over tonight?”

“Oooh, careful there. You wouldn’t want to break one of your own rules.”
I’m not at all surprised when he growls at me for that. However, I’m shocked when my nipples pebble. His feral rumble seems to shoot tingles straight down to my special bits in a disconcerting manner. I lock my knees together hard. That is a feeling I refuse to acknowledge. Refuse. The fire demon named Hank is not, not, turning me on.

“Speaking of rules, princess, I think I’m adding on to the list. No dating.”

“That makes no sense, that rule is stupid. I’m not doing that.”

“That makes perfect sense. And you’ll adhere to my rules if you know what’s good for you.”

You and what army are going to make me? I silently say to myself scowling at the buffoon. “Whatever. Why don’t you mosey on and let me get back to work?”

When Hank’s towering form leans over the desk I fight the urge to shrink back in my seat. Why won’t he just stalk off like the lumbering beast he is? He looks like he’s about to breathe fire. His cheeks are flushed as red as his beard and his eyes are shooting sparks. The muscles in his forearms are flexing like he’s holding himself back from grabbing me as he braces himself on the desk. Hell if I don’t notice he is all kinds of sexy angry.

“Careful, little girl.” The deep rumble of his voice is taunting. “You don’t want to be put over daddy’s knee again, do you?”

All I can do is huff my indignation, my mouth opening and closing like a fish, as my mind blanks and my panties flood remembering the last time I was over his lap. I can feel my face is all kinds of red. No, I do not want to be put over daddy’s anything, but why does just the thought of…no! No, no, no!

Giving me an appraising look he says, “Huh, maybe you do. You never cease to surprise me, princess.” 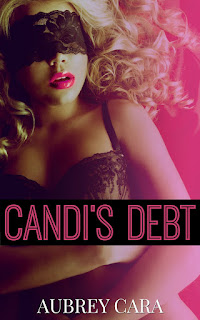 The men in my family are gamblers, cheats, and thieves. They aren’t loyal to anyone but themselves. It’s the Dawson way. My oldest brother was killed for sticking to that tradition.
I refuse to let that happen to my little brother. He’s all I have in this world and I’ll do anything to save him.
His debts are now mine, and I always pay my debts.
Now if a certain ape leader would get out of my way, things would go much more smoothly.

Hank-
I swore never to return to Texas. But here I am, wading neck deep into shit creek. I’m not even getting paid for this crap.
And Candi? She has more secrets than sense and represents everything I try to avoid. I’m not sure how I got tangled up with her in the first place. I have no business getting involved with a woman like her. She needs to be saved from herself.
I don’t have a white knight complex, and this girl needs a savior. I can’t be that guy.