Well, it's official!! It's been one year since my first book was published. Or at least it was official on November 6th. I kind of forgot. I traditionally miss anniversaries and birthdays, so this isn't a surprise.

It was late Friday afternoon when I realized, "HOLY SHIT!!" it's my authorversary!

I also realized in this past year I completed and published four full length books. I know some authors pump out way more, but I'm extremely happy with my four, Chasing Delia, Taming Kat, Mimi Mine, and Candi's Debt.

I write these stories because they're in me wanting to come out, like a less grotesque versions of the baby alien in the movie Alien. (bad visual, sorry) I share them because I sincerely hope others find them entertaining. I'm sure plenty of readers don't give a fig for my books, but for all of you who have read and enjoyed my stories, thank you!!! I'm even grateful for those who bought and read one, or a few of my books and disliked them.

Not all books and readers are going to reach the eHarmony's seven levels of compatibility. I appreciate you still, unhappy readers!

For those who haven't read any of my book, I write about love, humor, and kinky sex. Not necessarily in that order. Thus far all my stories have secondary character connections, but I consider my fourth book, Candi's Debt a break away from the series. Anyone who has read my books knows Candi's Debt is not like the others. Sure, it has spanking and romance, and a bit of humor, but it's also a little bit more raw and gritty, not to mention first person.

With every story I feel as if I grow a little more as a writer. After I finished Candi's Debt my inspiration cup ranneth over. I started over nine different stories, including a scifi series and an age play series. I went a little ADD from the constant stream of character chatter going on in my head. I wasn't sure which direction I should go. When that many plot babies hit you all at once it's hard not to get overwhelmed. Everyday I was outlining and writing a different story, not buckling down on any specific one.

I was soon derailed, which I usually am during the fall. Finding time and energy to write becomes a juggling act, and I'm a lousy juggler.

I'm happy to say I'm back on track and currently working on Wyatt's story. If you've read Candi's Debt you know he's Hank's best friend. If you haven't read Candi's Debt, do so now. I'll wait. ;)

While I'm writing please enjoy my other books. In honor of my authorversary Chasing Delia is on sale, and has an updated look. 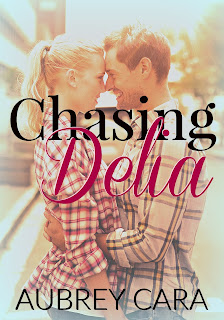 
With the delivery of one Dear John letter and a set of divorce papers, Delia Myers is on a her way to self discovery. First stop: Embracing she's a terrible judge of character. Especially when it comes to men.

Jake Forrester is beyond charming, and hunky enough to have every female in a hundred mile radius panting after him. Basically everything she is trying to avoid. Too bad he's been determined to chase after her from the second he's laid eyes on her over sized floral granny panties.

She may run, but can she hide from love?

Warning; Contains one no-good, cheating ex-husband, a heroine with a propensity to make a run for it, and a hero that has a new found love for spanking a certain sassy woman who runs from him.

He stopped furiously pacing to crouch down in front of her, his knees flanking her own. He was warm and smelled so good. His intense look was making her hot in ways she had never been.


“Del, I’ll give you time if you need time, I’ll give you space if you need space. But not for long.” He stood, grabbing her up with one arm around her waist, the other holding the back of the head. Her toes barely touched the ground when his mouth covered hers. The kiss was deep, hard, and scorching in force. If Connar had done this, it would have felt rough and abrasive. With Jake liquid heat pooled in her at her core, sparking a pulse of what she now knew was wonderful lust. Her body came alive against him.


Tipping her back he possessed her mouth. He pulled back only to blaze a trail of kisses that set her skin to tingling awareness with every touch of his hot lips and tongue. Down her neck and back up to nibble on her earlobe. She couldn’t get close enough as she dug her fingers into his shirt, ready to claw at the material.


He held her tight against him, grinding his erection into her for a moment, sending her head spinning. He pulled back only slightly as they both panted. He leaned his forehead against hers.“I’ve had a taste of you,” he said. “And I mean to have more. I mean to have all of you again and again till you don’t have the energy to crawl away, let alone run from me. And Del—” Grabbing the back of her head he made sure their eyes locked when he added, “I mean to make you mine.”


With that he broke away and strode right out of the apartment, slamming the door behind him. She wilted onto her bed. Her limbs had turned rubber, yet her body was humming with pent-up need. She wasn’t sure if she should laugh or cry. She felt slightly lightheaded and goofy. Jake did that to her and she was thinking she liked it.


She replayed him saying ‘I mean to make you mine,’ in his thick Texas drawl over and over in her mind, getting the tingles up and down her spine all over again. What did that mean? He said he couldn’t make any promises, but that sounded a lot like a promise.

Chasing Delia is a humorous contemporary romance with spanking--because those are the best kind.


Thank you for visiting and happy reading!!
Posted by Aubrey Cara at 9:00 PM