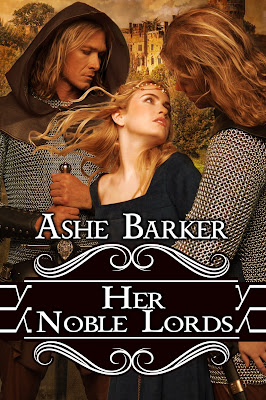 Here’s the back cover stuff:
After eighteen-year-old Linnet Routh is kidnapped from her home in Wellesworth castle by Ralf, the powerful, handsome Earl of Egremont, and his identical twin brother Piers, it quickly becomes clear to her that the seasoned warriors have mistaken her for someone else. Convinced that she is Lady Eleanor, a noblewoman who was promised in marriage to Ralf yet has refused to wed him, the brothers bring Linnet to a church with plans to compel her to speak her vows.

Linnet attempts to steal a horse from Piers and make her escape, but when she is caught her efforts end up earning her a thorough, humiliating bare-bottom spanking. Though terribly embarrassed by the manner of her chastisement, she cannot help becoming helplessly—and shamefully—aroused by the punishment.

When the brothers recognize the truth of Linnet’s claims at last, she expects to be cast aside as a mere commoner. To her surprise, however, they instead offer to make her their shared bride, and despite her misgivings about the idea Linnet agrees to the union. As they each take their turn to claim her, the pleasure of their dominant lovemaking leaves her yearning to be taken long and hard by both of them at once, and soon a passionate romance has grown between Linnet and her noble lords. But when tragedy strikes will it bring a permanent end to their newfound happiness?

And of course , a steaming hot excerpt to whet the appetite…

Ralf stops, turns to regard me. “You are offering to attend my bath, Linnet?”

My face is bright scarlet, I know it, can feel the heat in my cheeks. Nevertheless, I nod. “Yes, my lord, if you would find that pleasing.”

“I would, Linnet. I would find that very pleasing indeed.” He extends his hand to me. I stand, walk across the room to him, and take it.

Piers has been silent throughout the exchange. He follows us from the room.

In the bedchamber, a tub is already half full of steaming water. Three servants, strapping men all of them, parade in and out carrying more pails of hot water. The bath is bigger than the one I used yesterday and I note the water is considerably warmer. The privileges of rank are no different here than they were at Wellesworth.

“Brother, do you go first?” Ralf offers the bath to Piers, who declines.

“Nay, I think not. It was not I who disturbed that boar then proceeded to stamp through the muck he left in his wake. You stink, my brother, and I am amazed our little Linnet here can bear to be within six feet of you.”

“The perils of the hunt, that is all.” Ralf removes his jerkin and shirt, tossing them in the direction of a hovering manservant. I flinch at the sight of the broad bandage traversing his upper chest and shoulder. He loosens the knot holding it in place and unwinds it to reveal the wound left by my dagger. The injury is well on the route to being healed but still I gasp. The gash runs from under his arm and around toward his left nipple. It has been stitched neatly enough but will leave a prominent scar. Ralf glances at me, his eyes narrowing.

“‘Tis nothing, Linnet. Ignore it, for I intend to.”

His boots and breeches soon follow, then his braes. Gloriously naked and totally unconcerned, he ambles over to the tub and eases his body into it. The water rises perilously close to the brim but my attention is now riveted on his men’s parts.

I did, occasionally, catch a glimpse of Sir Henry in a state of undress but never close up. This is my first proper view of the male anatomy and I find it to be quite wondrous. My fascination must be writ plain across my face because Piers laughs out loud from his vantage point, lounging on the bed.


“I do believe our little maid approves. ‘Tis just as well she is made of stern stuff, else that cockstand you are sporting, brother, would send her running for her life.”

“A bride should admire her husband. I believe Linnet has the makings of a fine wife.”

I can only stare from one to the other. I find their casual acceptance of my presence here baffling, equally so the fact that Piers makes no move to allow his brother privacy. Not does Ralf appear to expect it. I must assume they do most things together, including their ablutions. Quite where I fit remains to be seen.

“If you’ve done ogling my cock, could you find a flannel and the soap, please, Linnet? In that chest over there.” Ralf’s command brings me back to the matter at hand.

“Of course, my lord.” I am accustomed to fetching and carrying so scurry off at once to do as I am bid. I return with the required items and kneel behind the tub. “Shall I wash your back, my lord?”

“Aye, you can start there.” Ralf leans forward to grant me access. I moisten the flannel and set to. 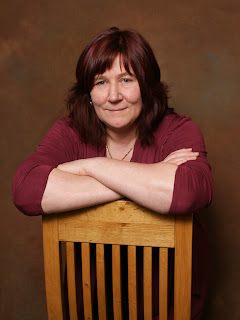 When not writing – which is not very often these days - my time is divided between my role as resident taxi driver for my teenage daughter, and caring for a menagerie of dogs, tortoises. And a very grumpy cockatiel.

I have a pile of story ideas still to work through, and keep thinking of new ones at the most unlikely moments, so you can expect to see a lot more from me.

I love to hear from readers. You can find me on my blog, and on the Totally Bound site. I’m on Facebook, and twitter and now on Tsu as well. I’m on Pinterest too, and Goodreads

Thank you for having me. Happy Reading
Posted by Aubrey Cara at 9:00 PM