~Getting to the Good Part~ #ScintillatingSunday 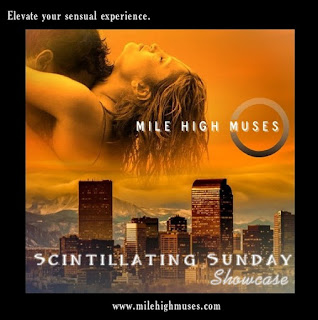 Welcome to Scintillating Sunday, where authors share eight scintillating words, sentences, or paragraphs from their stories. This week I'm sharing from my erotic romance Taming Kat.
“You're so wet, kitten. I haven't even gotten to the good part.”
The shiver that ran through her body had nothing to do with the cold. His voice was dark and smoky, and his fingers were wicked in their torture. He was lighting a fire that was warming her inside out.
He sat back on his heels and her mouth watered at the sight of his hard cock pressed against the front of his pants. He began slowly unbuckling his belt. No one could have paid her enough to take her eyes off the strip of leather as it slid through every loop. The bottom dropped out of her stomach at the thought of what he was going to do with that belt. She had only been spanked with his hand. She wasn't sure if she could handle being strapped by a belt. 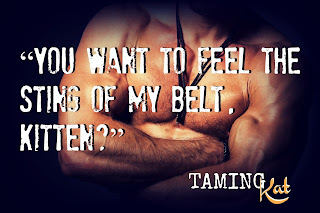 When he tilted her chin up, her focus was once again on his face. He wore a wicked grin that looked particularly menacing with his face shadowed by the night. “You want to feel the sting of my belt, kitten?” he asked, like he could read her thoughts. He folded the belt and pulled it tight, making a sudden snapping sound.
She jumped. Her mouth suddenly felt dry and she knew she was staring at him with wide eyes. The smacking sound of the belt had sent electric sizzles down all the way down to her toes and back up, awaking every nerve ending in her body.
He chuckled as he looped the belt behind her neck to pull her into a hungry kiss. She let go of the blanket to grab the front of his jacket. She felt wanton as she rubbed her breasts against the coarse fabric, tantalizing herself, before he pulled back tsking.
He pried her fingers off his coat, nipping her bottom lip and making her whimper.
“Naughty kitten. I think you were trying to claw me.” 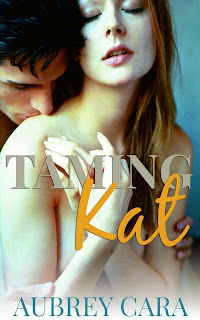 Moving halfway across the country to work part-time at a ranch had been a rash decision on Yankee, city girl Kat Martin's part. She understood that. She had just needed to get away from her pesky mom and older sister telling her what she should be doing with her life. She had no idea her bold move was going to put her in daily close proximity to her one and only one-night stand, Caleb McCrae.

Thank you Mile High Muses for hosting another wicked week of Scintillating Sunday!
Posted by Aubrey Cara at 7:30 PM